D. G. Driver talks about the writing of Cry of the Sea 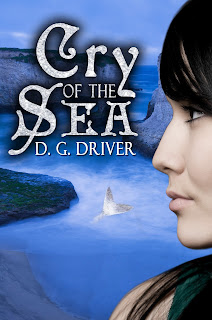 I was 19-years-old and living in Southern California when the Exxon-Valdez Oil Spill occurred. I barely remember it happening. I was a young adult, busy with college, working, a boyfriend (or two), etc. I wasn’t watching the news much. I mean, what teenager does, really? Ten years later there was a huge retrospective about it, though, and I was fully an adult by then. The 10-year anniversary of the spill was all over the radio and TV. Slowly the story worked itself into my imagination, the same way the droplets of oil coated the ocean floor from Alaska to Northern California, and the premise of a novel was born: What if mermaids were caught in an oil spill?

I began writing Cry of the Sea back then. It took many years and several major rewrites to get it to be a strong enough story to be picked up by a publisher. Over those years I did a lot of research about oil spills – the damage they cause, laws regarding oil tankers, how animals are treated during rescues. I wanted to be accurate about these things even though my book was a fantasy. The reason was because my novel wasn’t meant to be a Little Mermaid type of romantic fantasy. It was meant to be more of an X-Files-what-if-mermaids-were-real science fiction.

The young adults of 2015 have grown up learning about the 2010 oil spill in the Gulf of Mexico. There was a spill just this year off the coast of Santa Barbara. I believe that teens are much more aware of these environmental issues than we were in the 1980s. I think they watch the news more – or at least get their headlines from the internet. I’m impressed at the intelligence and willingness of teens to want to help do their part to keep oceans clean of litter and pollution.
Cry of the Sea has a major environmental theme. Juniper Sawfeather’s parents are environmental activists and have been raising her to follow in their footsteps. When the mermaids are discovered during an oil spill, she is in the center of the turmoil between her parents, the media, kids from school, a marine biologist and his intern, and the oil company itself over the fate of the mermaids.

In June, 2015 Cry of the Sea won 2nd place in the YA category of the Green Book Festival contest for environmentally themed books. Reviewers are raving about the environmental angle of the book. “It was an eye-opening read, at times really shocking and heart-breaking, and definitely one I won't soon forget. This is a great, mold-breaking YA for those who want more from their books than just silly romance stories and sparkling mythical creatures. It's a story of bravery, dedication, protecting all those things that are unable to protect themselves, and making a difference,” wrote Evie Seo of Bookish Blog. “As expected, this book has a strong message about environmentalism, but I'm impressed that the author was able to convey it without sounding preachy in the slightest. You're not going to get a sermon but you will see enough of the damage caused by oil spoils to be horrified by it. To be honest, I'm barely interested in the subject, but I went through a whole range of emotions and I cared about what was happening,” from Rachel Poole, Cullen House Reviews.
Cry of the Sea is the first of a 3-part series. The sequel, Whisper of the Woods (which will center around the destruction of Old Growth trees) is scheduled for release from Fire and Ice Young Adult Books in November. Follow me to get updates www.facebook.com/donnagdriver


Juniper Sawfeather is choosing which college to attend after graduation from West Olympia High School next year. She wants to go to San Diego to be far away from her environmental activist parents. They expect her to think the way they do, but having to be constantly fighting causes makes it difficult to be an average 17 year old high school student. Why do her parents have to be so out there?


Everything changes when she and her father rush to the beach after a reported oil spill. As they document the damage, June discovers three humans washed up on the beach, struggling to breathe through the oil coating their skin. At first she thinks they must be surfers, but as she gets closer, she realizes these aren't human at all. They're mermaids! Now begins a complex story of intrigue, conspiracy and manipulation as June, her parents, a marine biologist and his handsome young intern, her best friend, the popular clique at school and the oil company fight over the fate of the mermaids.

Read two chapters free at www.fireandiceya.com/authors/dgdriver/crysea.html
Learn more about me and my books: www.dgdriver.com

Joyce A Evans talks about her fabulous books on Penny's Tales